Adding a Puppy to Our Yucatan Household

When we first arrived in Merida 5 years ago we brought with us our 4 rescue cats. Of course the least expensive way was to drive them down in our van. 6 days later we had arrived in Merida, intact but never wanting to drive 4 cats thousands of miles again! Border crossing was easy, although we had spent more than 800 US dollars on health certificates, no one was even interested in looking to see what we had in our van.
The cats settled in quickly. They found that the pool was wet and luckily the two that fell (or were pushed in by our grump Maine Coon Gustavo) were able to swim out with no problems. They all found new places to explore and to nap and just were happy as can be. Sadly our blue Tonkinese who our house and blog was named for passed away two years later at 18 years old.


Now 5 years later it was time to shake up their lives with the addition of A PUPPY! And it has shaken up our lives too. We have not had a dog for almost 25 years and the last puppy was more than 35 years ago. As Carlos has been back and forth to the states quite often this year, I felt a dog would not only be company for me, but also be an alarm system if someone/something was entering our territory. So after much research and 8 months of watching dogs for adoption. I found a good match for us from a breeder of Havanese pups. (Here in Mexico they are called Bichon Habanero) As my husband, son and grandson are all allergic to dogs, I just needed to find one that would not cause an asthma attack and I never did find one for adoption. Havanese are hypoallergetic and do not shed. Also I felt that I needed a puppy to minimize the stress for the remaining 3 cats.Who had never been around dogs...ever!


So here we are now with a 5 month old puppy. I love her to death BUT it is so much work...to housebreak, to train, to wear them out so they sleep all night, to feed, shots, etc etc etc. But rewarding also...I am secure in the knowledge that she will alert us to anything that is different, after all she barked like crazy at a Costco size package of toilet paper today...it had snuck in the house and it did not belong!

Living With Dietary Restrictions In the Yucatan... 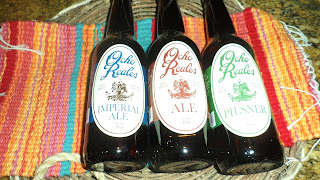 A Mexican made gluten free beer....

When we first purchased our home here in Mexico in 2007 we had to mule down anything gluten free that we needed in our suitcases. It wasn't too bad because we were usually only staying for a week or two. Fast forward to us moving here full time in 2014 and suddenly it was much more difficult to cook and make foods that were our comfort foods. So we were still bringing down a suitcase full of pasta, breads, mixes etc. Soon after we found a health food store that had corn pasta. Not our favorite but it did in a pinch. Than Costco started stocking a few items. A Mexican firm distributed a gluten free bread that was OK toasted. And now 5 years later the only thing we mule down in our suitcases are gluten free bagels from Trader Joe's. However sometimes when you find a gluten free food that you like...stock up because it may not be seen again...ever or a year or more!
Back in the early days, I was making from scratch a cauliflower pizza....now I can get it frozen at Costco way better than I ever made it! Currently I have 6 in the freezer just in case! 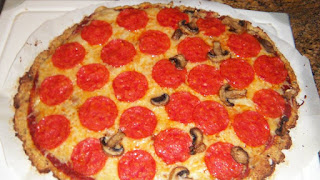 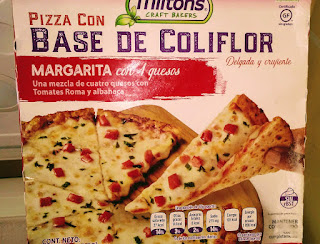 In the Freezer at Costco! 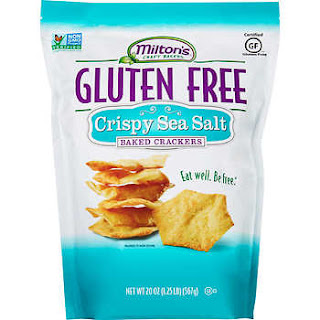 One of the disappeared products! (a favorite!)

What I am seeing here in the Yucatan is the availability of products in the groceries are reflecting a sophistication of palate of the population! So if you are gluten intolerant, lactose intolerant or diabetic there are many more choices for you. Each time I go to one of the grocery stores I am discovering new products from around the world as well as from Mexico.
Here is a look at what's in my pantry! 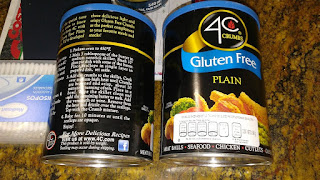 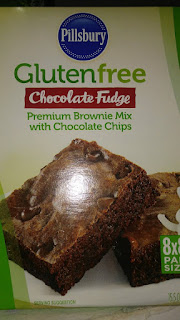 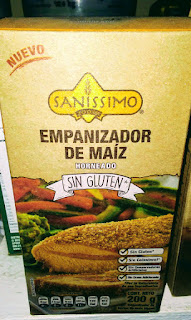 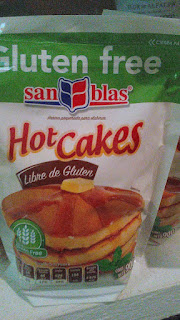 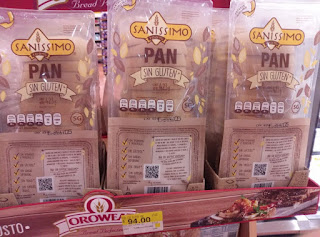 Don't let dietary restrictions hold you back! It gets easier and better every day. Remember that vegetables and meat are plentiful and relatively inexpensive here in the Yucatan! If you are a vegetarian or vegan there are many more products available for you too! 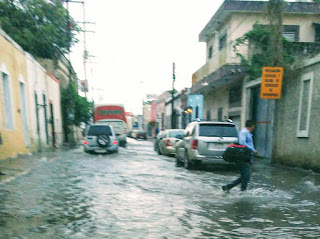 Merida has hot and humid conditions almost all year long. However the official rainy season is June through October. The rain is usually in the afternoon as it can build to a storm all day long, but it's usually over after a brief but heavy rain. The street can look very much like the photo I took above as there are not many storm drains in Merida's infrastructure. The water does absorb into the ground quickly because of the limestone and underground rivers.
I love sitting on my terrace and watching the approaching storms. There is not always thunder and lightening...but sometimes it does and it can also get very windy. I like the gentle storms the best! Today about 4 in the afternoon, one of the gentle storms rolled in. 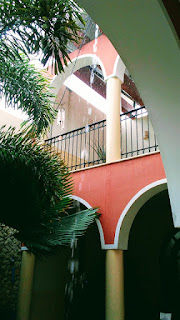 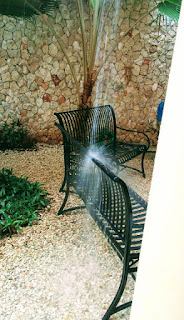 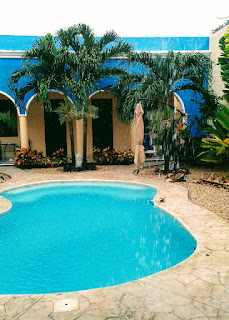 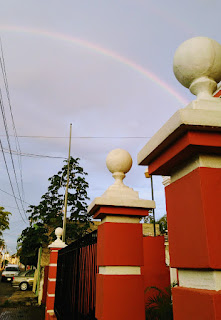 The storm cooled down the temperatures by about 10 degrees. Making it into a just lovely evening!

Almost Coming Up To the 5 Year Mark!

We are coming up on our 5 year anniversary of living in Merida. I am sitting here on my terrace, already sweating at 8 am in the morning thinking of all that has happened in these 5 years. Do I like living here? YES! Even though it can be hotter than I have ever experienced, the good far out weights the bad. The weather for the most part is bearable...you just learn to deal with it and change your lifestyle a bit...like take a siesta, slow down and savor the days of October through March! The social pace slows down during the hot months anyway. Most of the snowbirds are gone by April 1st and it's just us year around folks and of course people who are searching to see if this is the right place for them.

There have been several organization that have formed and/or expanded in the 5 years I have been here. Several of them have become a good part of my time. I am a volunteer at two or the organizations and I really get a good amount of personal satisfaction working with them.  Fundaciion BAI is one such organization. I am on the social committee and we plan most of the fund raising activities. This organization does such important work in the Yucatan with HIV as well as sex education with teens. You can find out more information here: https://www.fundacionbai.com/

I have participated in several activities with Yucatan Giving Outreach. We made more than 100 sundresses for needy girls and more than 500 knitted hats for the elderly in nursing home or in the pueblas. The organization does much more than that, art programs, support of soup kitchen, teaching English and so much more! Information : https://www.facebook.com/groups/yucatangivingoutreach/ 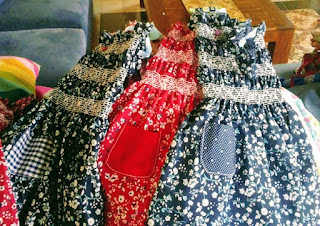 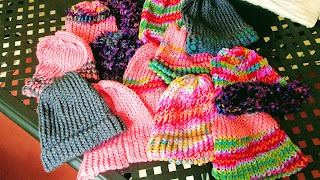 A great group has formed in the last year and 1/2 and is the Merida Coffee Club. It's a great group of people who just gather to chat and drink coffee type beverages. Though sometimes they do other activities like eating shrimp tacos or go bowling. There are many days that they sponsor pop up activities in different sections of the city. Very inclusive it's a great place to meet like minded or just get further info about Merida. Information: https://www.facebook.com/groups/227201847808754/

Another group is the First Tuesday Artist of Merida. This group of about 140 artists meets the first Tuesday of each month at a members home. After sharing a pot luck the artists share projects they have been working on. Sometimes there is a theme, and sometimes not. At any time there are oil and watercolor painters, puppet makers, glass artists, weavers, print makers, potters, sculptors, photographers, leather artisans....and we all share our works! https://www.facebook.com/groups/176173076405975/ 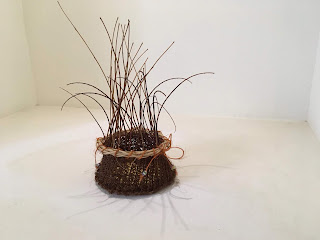 So much more is going on in our life...I am hoping to rekindle my blog and to write more often so I can tell you just how great Mexico is treating us!