From Rainforest to Hurricane...all for my kitchen!

Back when we were choosing our hard surfaces like pasta tiles and our plumbing fixtures, we also choose our granite counter tops for the kitchen. We spent part of a very hot day walking around the granite yard pausing here and there and discussing (sometimes heated) the granite each of us liked...that is Carlos, Roger (our esteemed architect) and I! I like the lighter granite with browns and blacks, Carlos was drawn to the more exotics like onyx and Roger liked the dark stunning ones like blacks, browns, blues. It ended up Roger and Carlos decided on the Rainforest as seen below. I was odd man out, but as I know that decorating is not my forte I was not too upset and was willing to go along with them. Fast forward almost a year later and it was time to order the granite for the kitchen. As he tells it, Roger stopped and got a piece of the Rainforest granite and took it to the house. He laid it in the kitchen area and hated it! The colors just did not work with the kitchen. So back to the granite place and now Roger had to decide again what to choose. It was only days until Carlos and I were arriving for our December stay. It's a wonderful thing that Roger has spent so much time getting to know us! (since 2007) His new choice was called Hurricane and a piece of it is below: 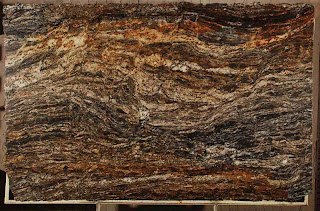 Carlos loved it at first sight...I was ambivalent. Even though the rainforest was not my choice I had spent a year getting to love it. 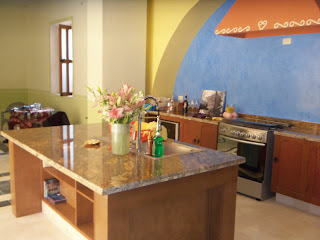 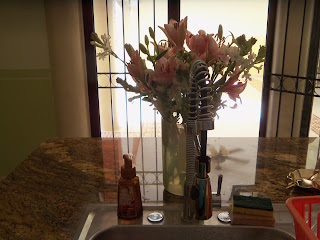 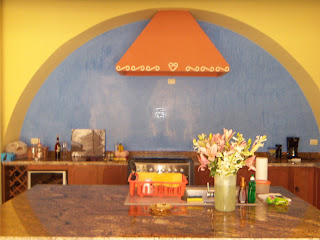 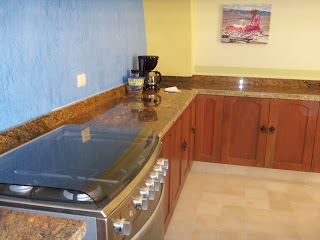 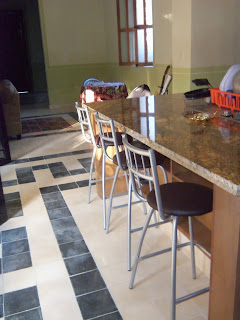 After spending a month with the kitchen, I love the granite. It is a perfect color and I do need to say, "Hats off the Roger" he really does know Carlos and I! Now can I talk about the kitchen sink that I hate?

Will Hockey be in our life? 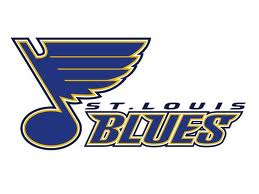 Last night Carlos and I went to the opening hockey game between the St Louis Blues and the Detroit Redwings. We have not been to a hockey game in almost 10 years. We didn’t know any of the current players, but the action was hot and the crowd, at standing room only, was hotter.  Carlos’ employer gave us our tickets, which at 160.00 US dollars each, was enough pesos for us to live in for a week…. or two. 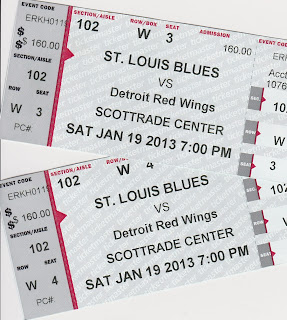 At one time our life revolved around ice hockey. Our son was an avid player, starting at about 4 years old. (He started skating at about 2 ½ years old) He played on a travel team and many of our weekends were spent traveling to such places as City, or . When we weren’t traveling to games we were getting up at ungodly hours for his practices. For several years Carlos participated in a men’s pick up league that played Friday nights at .

Warm socks, ear muffs and gloves were the fashions of those days and I could always be found with a steaming cup of hot chocolate in my hands. Than for several years our teen age high school exchange students we hosted were hockey players from . Now we had three hockey schedules to try to follow. There were weeks we spent 12 to 15 hours in rinks, our garage was filled with really stinky hockey gear and I had several broken and cracked windows from errant hockey shots. As fast as it started, it was over. Our son finished school and went on his way. Carlos stopped playing and we hosted mostly girls who did not play hockey.
After the hockey game while waiting on the platform for the light rail train, Carlos turns to me and asks, “Do you think they have a hockey team we could watch at the mall rink in ?” Is he thinking that he may have hockey withdrawal? Didn’t we have enough hockey for life? Does he not remember those practices, or those long road trips with icky hotels and rampaging hockey brats? Tell you what, If my granddaughter or grandson plays hockey, we’ll come NOB for some of those games! 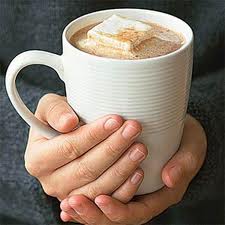 
Most of my life I have made friends through school, work or my son's school and sports activities. I was a
little unsure of how I would make friends in Merida without any of the above to rely on. I saw an introduction on Yolista of two new people that would be in Merida the same time we would, I e-mailed them and made arrangements to meet. I am so glad I did. The two Canadians are what I would call 'sympatico'. Carlos and I had a wonderful wine and munchies evening at our home, and got to show it off to our first guests! The next week we joined David and Leo at their wonderful modern home for a delicious dinner. On New Years Eve they joined us again for wine and appetizers. I am so happy that I took a chance and we got to meet such fabulous folks! I hope they will be our friends for a long time...
Two years ago when we were here in Merida for the month of December our house was almost a wreck and we were just slightly one step above camping. We couldn't or wouldn't ask anyone over. Actually we only had two plastic chairs and a mattress on the floor. That was way less than my first apartment back in the college days had! We went to the mel nights (this is a social night at the Merida English Library) and really didn't meet anyone. This time we went to the mel nights again and found two empty chairs at a table and asked to join them. Great move! We met Bill and Linda from PA and right from the start it was like we knew them for a long time. They came over to see the house, joined us for wine and appetizers and after we walked Paseo de Montejo and had an ice cream. What an interesting life they have had! And they also joined us for New Years Eve.
Our friend Arturo introduced us to Priscilla and George who rounded out the New Years Eve party along with Arturo, Orelia and their daughter Karla.
So here I was worried about making friends! We had another couple approach us in Santa Ana park and introduce themselves... they said, "We saw you at English Mass on Christmas Eve" Wow, it looks like I will have an easier time making friends than I thought!
One morning in Santiago, we saw a tall gringo type man sitting on the bench perusing the world and I saw to Carlos, "That is hammock man Paul, you should go talk to him you really like his blog!" He did and he joined their coffee meetings Thursday morning at 9am. He got to meet Eric, Richard and Marc also. Bill from PA attended too. I know whenever we are in Merida, Carlos will be attending at Flor de Santiago, their conversations are right down his alley!
I have had many e-conversations with people I have not yet met. Our times in Merida have not overlapped. Lee and Paul, Darren and Wade, John and Allen, Cathy....wow I can't wait to meet these wonderful people!

Note: No photos from New Years Eve as I did not ask permission of the folks attending..... no one had a lampshade on their head.... as I do not have any lamps...yet
Posted by Carlos Q and Pat Q at 10:53 PM 3 comments:

Crossing Paseo de Montejo we continue to walk on Calle 45. Now the streets become narrow and the sidewalks a little uneven. Houses of various states of repair line the streets, the doors opening directly onto the narrow sidewalks. Many doors and windows are left open and I notice that people passing by mostly direct their eyes forward and do not look into the homes. I wonder if I've been caught sneaking looks..... 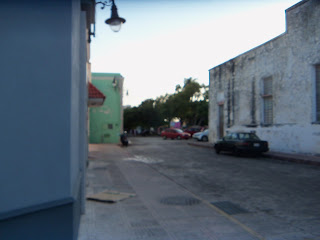 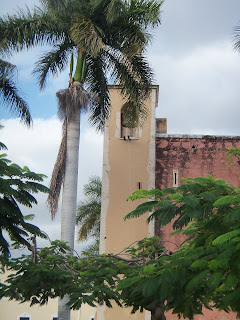 I love to saunter along Paseo de Montejo. A leisurely walk along the wide and shaded sidewalks can be a great pleasure anytime of the day. On one of my last days in Merida I decided to record my walk from Walmart's to home. So here it is... in photos!